After completing various commercial aircraft ratings over the years it became obvious there is a need for fully interactive aircraft systems training software. Traditional CBT (computer based training) seemingly offers very limited interactivity and is mainly just static slides (and a lot of them!) as per the aircraft manual.

Thus the aim of this suite of software is to provide highly accurate system models with full interactivity.

Aircraft training / tests are always very demanding, intensive and stressful if you are under prepared. The best way to reduce that pressure and make training / tests more enjoyable is to be well prepared, always prudent as your career can be influenced by the result!

Thus our fully interactive software approach provides you with the ability to prepare yourself in advance for that new type rating, recurrent training, or just refreshing your knowledge.

Run through normal operating procedures, inject faults into the systems making your own choice of real-life event scenarios, then run through non-normal procedures with the QRH  (Quick Reference Handbook) just as you would in the simulator or when flying the line.

The best way to get a 'feel' what the software does is to view the 'Hydraulics and Flight Controls' demonstration video. In essence it accurately models the hydraulic 'A', 'B' and standby system, hydraulic control panel,  hydraulic flight control panel and all their associated switches / lights.

Separate windows provide a Master Caution / Recall panel, Hydraulic Quantity / Pressure indications and a Flap lever. The Leading edge (LE) flaps / slats and TE flaps window shows the dynamic movement of the wing leading and trailing edge surfaces together with the LE Annunicator Panel and TE Flap Indicator Gauge and associated lights. Both the normal and alternate operation of the wing surfaces has been modelled which includes Autoslat operation and TE Load Relief  functionality.

The indicator lights and switches on the hydraulic panel and flight control panel can be superimposed and operated from the main schematic as desired. A  whole host of technically information related to the components of the system can be viewed by using the 'i' for information feature.

The 'Electrical System'  also has a colour coded schematic, relevant electrical control panels and functions in the same manner as the 'Hydraulics and Flight Controls' module.

We believe that learning is 90% visual.

The main system schematics, cockpit panels and all the windows and their content have been designed using 'vector' graphics. This means you can zoom in / out without losing any visual quality,  ideal when using an overhead projector when training others.

The software and graphics has been implemented in such a way enabling it to run without any issues on older slower machines as well as the latest higher speed of computer processors / graphics cards.

So what faults can you inject into the system? The 'Fault' menu is designed to allow you to set the aircraft into a whole host of configurations thus covering the QRH drills.

Either left or right engine driven or electrically driven hydraulic pumps can be failed. An overheat is also possible for the electric hydraulic pumps.

Both single and dual channel failures for Speed Trim, Mach Trim and AutoSlat can be injected showing the different responses from the Master Caution / Recall system.

Other failures and triggers.

'i' for information provides a whole host of technical information regarding the system. Just select it to 'on' from the Options / View menu then rollover the relevant 'i' icon and a pop-up window appears.

''Light' information gives technical information regarding the panel lights. Just select it to 'on' from the 'Options / View' menu then rollover the relevant light and a pop-up window appears.

We were delighted to announce the release of our first module 'Hydraulics and Flight Controls'  and have now added the fully intearctive 'Electrical System'.  The next module will be 'Air Systems and Pressurisation'.

We are also developing detailed video's reviewing the fundamentals of each aircraft system (as featured in our software) to complement the family of interactive learning software we are creating.

Our aim is to provide the highest-quality training experience to renew / enhance your knowledge. 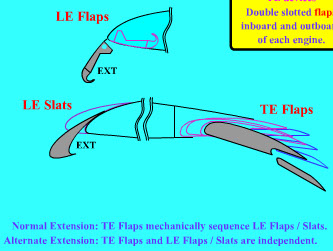 The 'Electrical System' does not have a dedicated 'Fault' menu like the 'Hydraulics and Flight Controls' but is still designed to allow you to set the electrical system into a whole host of configurations thus covering the QRH drills.

Electrical Components that can be switched on / off.

Other failures and triggers.

The software content and its themes is NOT to be used operationally.  Always refer to your official company aircraft training manuals / aircraft manuals as the definitive source of information.